On the afternoon of August 29, four buildings on the 700 block of North Salina Street caught fire and burned until firefighters extinguished the blaze the next morning. After the fire was put out, Mayor Ben Walsh announced that all four buildings would have to be knocked down for safety reasons.

Since the fire, many in the community have combined sympathy for the people directly affected–the people who lived and worked in those buildings–with a sense that this fire is a blow to the City as a whole. CBS anchor Michael Benny summed that feeling up in a tweet two days after the fire:

It’s a pretty forlorn reaction from a city that is supposed to be “brimming with excitement” about its own “modern-day renaissance.” If there’s as much energy and action as Syracuse’s boosters say, why mourn a few old buildings? Shouldn’t someone swoop in to build something newer and better on the site?

The truth is that all of the new construction happening downtown doesn’t have much to do with the Northside, and everybody knows it. That “renaissance” going on in Armory Square hasn’t even spread to the empty corner of Fayette and Warren Streets, so you know it’s not going to reach all the way up to the 700 block of North Salina Street. If Downtown’s revival is the only thing Syracuse has going for it, then the land where those buildings burned is going to stay empty for a long time.

But there is more going on in Syracuse, and you don’t even have to look that far to find it. Less than half a mile away from the fire, at the corner of Butternut and McBride, a hospital and two non-profits got together to build something new on a site where something old fell down. The vacant building that had sat on that corner for more than 100 years started to fall apart, and by 2012 it was a hazard to people walking down the sidewalk. St. Joseph’s Hospital, Home Headquarters, and Housing Visions bought the old building, knocked it down, and built the new one as part of a huge project that put up 49 new affordable apartments all across the neighborhood. The result is a better place to live for the people in Syracuse who need it the most. 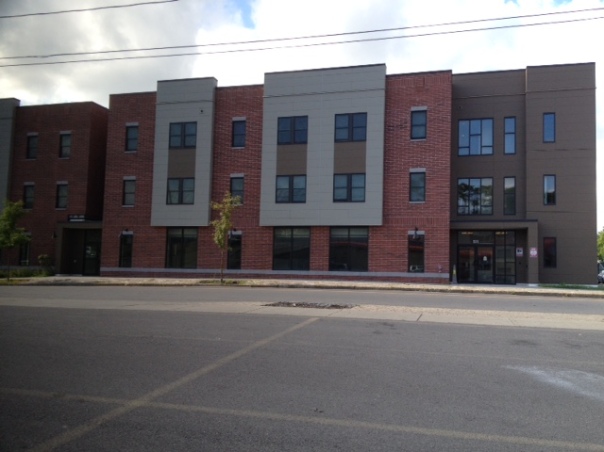 Walk two miles further east to 603 Hixson Avenue, and you’ll find more reason to hope for a better future in Syracuse. In 2014, the house at that address burned and had to be knocked down. No for-profit developer would have wanted anything to do with that land, but Habitat for Humanity bought the land and decided to build two new houses on it. Habitat turned the construction site into a workforce development program for local masons, and Habitat worked with the Syracuse University School of Architecture to design houses that are “high quality yet still affordable” and that use green technology for heating and cooling.

A new thing is happening in Syracuse, and it’s happening where people don’t always think to look. Community organizations are working together to create better neighborhoods all across the City. That’s hard work, it takes time, and it’s happening in neighborhoods left behind by the financial and economic systems that build glitzy, profitable, exclusive places like Downtown. That work means hope for the whole City, and it means hope for North Salina Street.