Five young people have been killed violently in Syracuse this year. After the most recent killing on October 11, the community and its leaders are calling for action to stop the violence and to address its root causes. New York State Governor Andrew Cuomo responded to that call by sending State Troopers to patrol “high-crime areas” in the City, as if heavy policing is some kind of new solution to a “recent” problem.

The long term plan for dealing with violence and poverty in Syracuse has, for decades, been segregation and incarceration enacted through the exercise of police force in certain neighborhoods and on certain kinds of people. It’s led to miscarried justice, like when a man trying to make a new life was sent to jail after speaking out about the difficulty of reentry. It’s enabled major private employers to deny jobs to qualified applicants. It’s how Syracuse, the 9th poorest city in the nation, managed to pen all of its poorest people in a few select neighborhoods. Sending more police into these neighborhoods will just extend the status quo.

What’s changed now is that the neighborhoods that we were comfortable to write off are bursting at the seams. In 2000, there were 12 census tracts in Syracuse where at least 40% of people were poor. Fifteen years later, 30 census tracts were “high-poverty.” 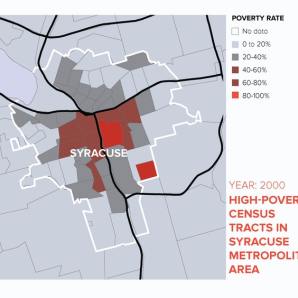 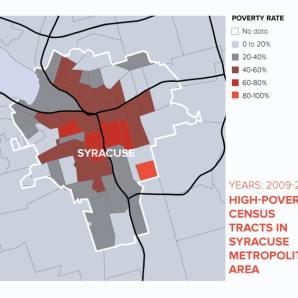 It’s no coincidence that the community’s call to action came after James Springer III was murdered on the Northside–a neighborhood that has only become “high-poverty” in the last several years.

This moment is an opportunity and a reason for hope. The people who know have long tried to convince the wider community that poverty in one neighborhood is a problem for all neighborhoods. Their words used to fall on deaf ears, but as their predictions come true, powerful people like Mayor Ben Walsh are adopting their language:

If anything good can come of this year’s violence, it will be that people recognize our common cause in making all of Syracuse a better place to live.

The governor has promised to speak with “community leaders, clergy and law enforcement” about making a “longterm plan to reduce violence” in the City. Those conversations have to result in a plan that radically changes the way the police and the courts operate here, prioritizing rehabilitation and community stability over punishment and control.

But that can only happen with the common understanding that zealous policing is the source of so many problems in Syracuse’s neighborhoods. The reflexive expansion of police activity in response to the spread of those problems reveals that no such common understanding exists. Those who cannot remember the past are doomed to repeat it.