University students and people living in Syracuse long-term face a lot of the same problems and should be natural political allies, but some structural barriers keep them from working together to make the City a better place to live.

Take this garbage pickup proposal. City Hall collects trash from small residential properties but not from big apartment buildings. Right now, the cut-off between ‘small’ and ‘big’ is 10 apartments—they’ll pick up the trash from a 10-unit buildings but not from an 11-unit building. City Hall was talking about moving that cut-off to 4 apartments—any building with 4 or fewer units would still get free trash pickup, but now buildings with between 5 and 10 units would need to pay a private company to haul away their trash.

It’s pretty obvious that the result of this would have been to raise the rents on people living in buildings with between 5 and 10 apartments. Contracting out trash pickup would have cost those buildings’ owners money, and landlords would have passed that cost along to their tenants in the form of higher rents.

You can find those buildings (outlined in red) in most parts of the City, but they’re concentrated in Syracuse’s poorest neighborhoods (mapped in yellow). On the face of it, this is a bad policy that would take money out of the pockets of the people who can least afford it. 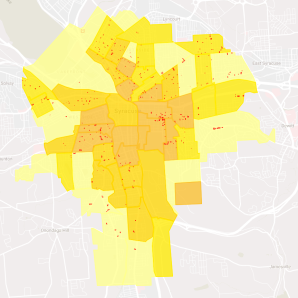 But a lot of people will look at this map, see that a lot of the affected properties are on University Hill and say something like ‘well that’s student housing, they’re not really poor, they can afford it, screw them.’

A lot of students, if they even ever see this map, will probably ignore it.

Both responses are short sighted. Students really are affected by what happens in the City—this law really would have raised their rent—and for that very reason, they are potential allies in the fight for a better Syracuse.

But there are structural obstacles that stand in the way of that alliance. The most obvious is students’ transiency. Say this change to garbage pickup had gone through, and several thousand people ended up paying more in rent. Give it a few years, and no university students will be around who would remember the change. Longer term residents can help students understand the small histories, like this one, that have shaped Syracuse over decades.

Another obstacle is the University’s ability to do for students what government should do for everybody. A lot of the time it’s easier for students to get the University to fix a problem than to go through local government—that’s how Syracuse has ended up with parallel segregated quasi-public services like the University’s transit system and police force. These services are insufficient, though, and ultimately fail to protect students from the same threats that people face throughout the rest of the City everyday. Students can improve their own lives by working with the rest of Syracuse to advocate for the kinds of positive change that the entire City needs.

Syracuse’s problems affect every single person living in the City. They are the result of an inequitable distribution of power that can only exist when the people most affected by those problems are kept from working together to solve them. So people in Syracuse hate on students, students ignore people in Syracuse, and both groups continue to face the same pressures day in and day out. If they organized together, they would have the power to make the entire City a better place to live.