Matthew Paulus, one of several developers with plans to build new housing at the eastern edge of Downtown, is trying to get goodwill and tax breaks by putting ‘affordable’ apartments in his newest project, but the rents don’t match the rhetoric—tenants will pay $1,050 a month, not including utilities. This is clearly not a good faith effort to engage with poverty or housing as those crises actually exist in the City, and it shows the need for City Hall to take a more active role in securing meaningfully affordable housing in Syracuse.

It takes some slick thinking to claim that $1,050 is an affordable rent in a city this poor. The first step is to side-step the City by talking about the Syracuse Area. Median household income in Onondaga County is about $55,000. These apartments are supposed to be affordable for households making “no greater than 80%” of that number, so $44,000. ‘Affordable’ housing shouldn’t take up more than 30% of a family’s income, so a family making $44,000 a year could ‘afford’ pay as much as $1,100 a month in rent.

But if Paulus ran those same calculations with the City’s median household income (about $35,000) instead of the County’s, then he’d get a definition of ‘affordable’ that would require him to set the monthly rent at something more like $650—that sounds a lot more like what someone might expect to pay live in Syracuse. Paulus can only claim that $1,050 a month is ‘affordable’ if he ignores the stark disparity between the economic situation on either side of the City line.

So the City line disappeared when Paulus was figuring out what is means for one of his apartments to be ‘affordable,’ but it will snap back into focus if he gets the tax breaks he’s asking for. If SIDA grants them, then that municipal boundary will shield suburban schools from the cost of that lost tax revenue, and it will put that burden on City kids.

City Hall has the power to flip this dynamic on its head and make the City line work for people living in the City. Developers want to build in Syracuse after all, and the Common Council has the power to enact affordable housing legislation that could apply to any development in Syracuse. City Hall also has control over permitting, zoning, tax assessments, and SIDA—an entire regulatory apparatus that can determine the success of failure of any given development. Syracuse’s government needs to use all of these tools to make sure that new housing is affordable in a way that really means something to the people living in the City now. 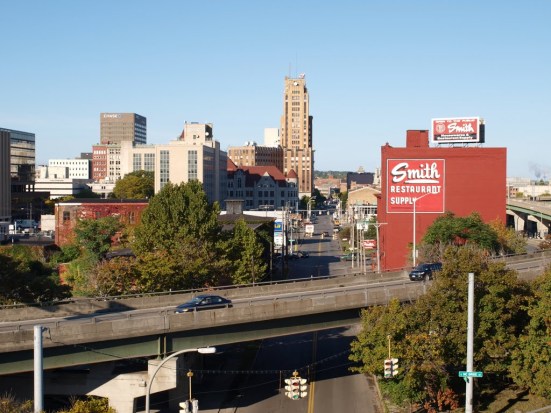 There’s going to be a lot of new housing built in the next few years. Developers, non-profits, and state and local governments are all looking to rebuild the eastern and southern edges of Downtown once I81 comes down. They’re all going to pay lip service to ‘affordability’ and ‘inclusion,’ but, if this project is any indication, it will just be empty talk. That’s not good enough. We need to be clear about what words like ‘affordable’ really mean for people living in Syracuse, and we need a City Hall willing to use its power to enforce those definitions and secure a better future for the entire City.