In 1919, Syracuse’s Planning Commission published a report on the work that it had already done and its plans for the City’s future. That report contained some big ideas for massive public works projects, but most of its pages dealt with the minutiae of subdividing undeveloped plots of land on the City’s outskirts to accommodate future growth. In particular, the Planning Commission focused on the ways that the street grid’s design could maximize the usefulness of land in the City.

Take the area south of James St between Teall Ave and Shotwell Park. The people who developed that land wanted to turn the whole thing into a residential neighborhood, but they had a hard time building streets up Melrose Hill in what is now Sunnycrest Park.

“Hastings, Clifton, etc., were developed and built on up to the base of the hill from the north. The slope being so steep that the streets could not be constructed further as plotted and maintained without unwarranted cost and expense, caused further development to come to a standstill. The lots on top of the hill, shown in the shaded portion, became city property due to default of tax payments.”

The Planning Commission’s solution was to replot the area along curving streets that would make it easier to build on the hill. 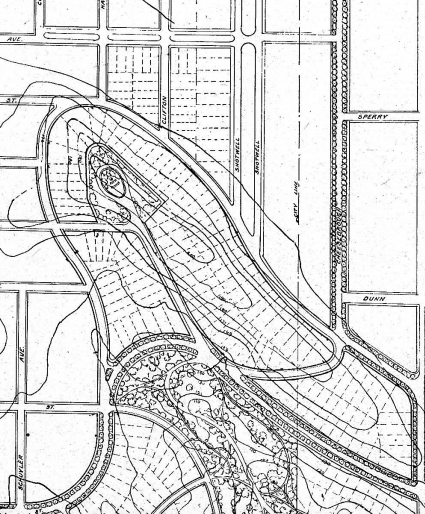 The developers took those suggestions and tried something similar, laying out a couple of streets that followed the hill’s topography, shown in this map from 1924.

But they did not make any changes where the hill was steepest (shaded blue on this map), and so this new plan never made it past the drawing board. In 1925 City Hall bought up all of the undeveloped land and turned in into a golf course.

The Planning Commission addressed a similar problem at the border between Westcott and Scottholm. There, two very steep hills made it difficult to build on Cumberland and Westmoreland Aves between Genesee St and Euclid Ave.

“At the present time this section stands by itself undeveloped and yet surrounded on all sides by pretentious homes of prosperous citizens. Westmoreland and Cumberland avenues are only partly accessible from East Genesee street, Allen street, or Euclid avenue, on account of prohibitory grades ranging from 18 per cent to 30 per cent.” 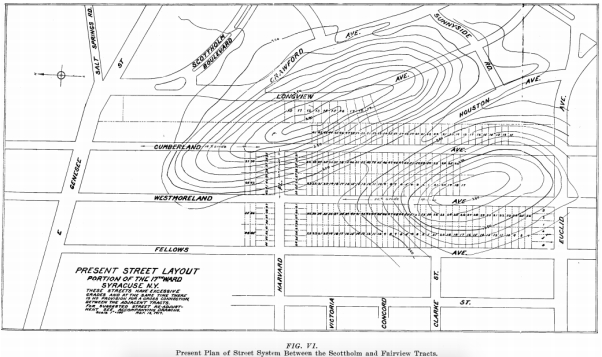 Again, the Planning Commission suggested moving streets to better match the area’s topography. They would have extended Houston Ave along the valley between the two hills to intersect Westmoreland Ave at Harvard Pl, made Cumberland Ave curve and intersect with Westmoreland Ave according to the hills’ topography, and used stairs to provide pedestrian paths between streets where the hills were too steep for cars to travel.

By 1938, they’d begun work on the Houston Ave extension, but not on any of the other changes that the Planning Commission recommended:

That’s where things still stand today. City Hall’s zoning maps show portions of Cumberland Ave that have never been built, and people actually own the residential lots that line it, but there’s no evidence of any of that on the ground. If you bushwacked your way to 209 Cumberland Ave–a 5,362 square foot residential lot assessed at $2,500–you’d be in the middle of a bunch of trees.

In both of these cases, poor street layout meant that potentially valuable land went undeveloped. That cost City Hall property tax revenue, and it limited the number of people who could live in those neighborhoods. The Planning Commission’s recommendations for these neighborhoods were attempts to maximize the usefulness of city land by making it more accessible to more people.

These are still important concerns. Large vacant parcels on the Lakefront, the outskirts of Downtown, and between Hiawatha Blvd and the CSX train tracks are prime candidates for new development. The danger is that City Hall will give those huge lots to single developers who will just build one or two buildings, a huge parking lot, and pretty landscaping (see: Cor’s biotech accelerator and SU’s Center of Excellence). That’d be a waste of land, just like when developers 100 years ago wasted all that land along Cumberland Ave and Hastings Pl. City Hall should instead follow the 1919 Planning Commission’s lead and ensure that the land is used efficiently. That could mean working with private developers to plan those parcels, or it could mean laying new streets and dividing the land into small lots before selling it off. If City Hall takes this more active role, it will put more money in the municipal budget, build better neighborhoods, and make the best use of Syracuse’s land.