There is very little dedicated space to bike on Syracuse’s streets. What space has been carved out—a protected track on part of University Ave, unprotected lanes on a few other streets—is disconnected and half-hearted. It’s definitely not the full bike network that City Hall drew up in its comprehensive plan. 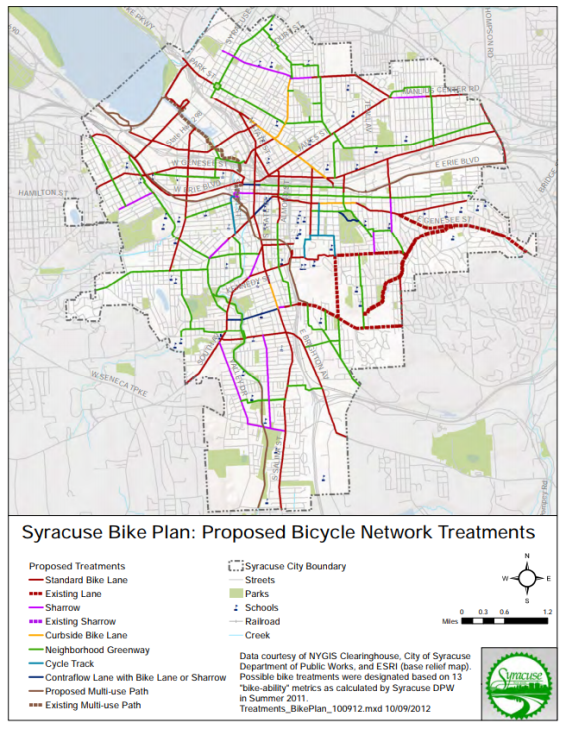 But City Hall isn’t doing a whole lot to make that network a reality. Even when DPW repaves a street that’s part of the Bike Plan, they’re not painting bike lanes. Amazingly, according to transportation planner Neil Burke, that’s on purpose:

“If we are doing one block of a street, and it’s on the bicycle master plan, we’re not going to roll-out full-fledged bike lanes just for one block. What we like to do is take more of a corridor approach connecting destinations instead of one block at a time. It can be slow to materialize, but what it does give us is usable infrastructure instead of just checking a box.”

That would make some sense if City Hall was actively working to build those corridors and connect those destinations, but they’re not. They’ve left it up to other institutions—normally New York State or Syracuse University—to decide where the City’s bike lanes will run, and that’s left Syracuse with bike infrastructure that’s helpful to get from Albany to Buffalo or from Westcott to the University, but not much of anywhere else.

There are two obvious ways for City Hall to build a bike network that works for the whole City. First is to start building the Comprehensive Plan’s bike network whenever possible. DPW is repaving Brighton Ave between Thurber and State Streets. The Comprehensive Plan says that spot should have bike lanes, so DPW should paint them on once it’s done with the paving. It’d only be a few blocks of bike lanes, but those few blocks would get people biking on Brighton, raise awareness of City Hall’s stated intention to paint lanes all the way from South Ave to Seneca Turnpike, and build the political support that City Hall needs in order to make that full buildout a priority.

Second, there should be bike lanes on every single street that has a bikeshare station. It’s insane to provide people with bikes to ride without a safe place to ride them. Those streets are all already part of the comprehensive plan, and the bikeshare stations’ very existence proves the need, so just go out and paint the lanes.

It’s great that Syracuse has a bike share. It’s great that there’s a new way for people to get around the City without a car. But a pushing bikes without building bike lanes is asking for trouble. People need to be able to use that bikeshare—and they need to be able to ride their own bikes—safely, separated from cars. The comprehensive plan already shows what that would look like. Now City Hall has to actually make it happen.