Central New York’s villages and cities are all places where people can live cheaply and easily without the need for a car. They are places where daily necessities are within walking distance, places with a variety of kinds of housing, places where full participation in the community’s economic and social life is possible for people who get around by rolling, walking, biking, or riding the bus.

But all these places—Cortland, Liverpool, Fulton, Auburn, Baldwinsville, Oswego, Oneida, Phoenix, Syracuse—are disconnected. Long distances and infrequent (or nonexistent) transit prevent people from travelling between them without a car, making it impossible for a car-free resident of Cortland to take a job in Auburn, or for a plant in Syracuse to hire someone living car-free in Oneida. The result is that the places with the most jobs are also home to most of the region’s jobless workers.

Car-free households cluster in Central New York’s cities and villages. Syracuse, Cortland, Auburn, Fulton, Oswego, and Oneida are home to many people who live car-free. So are smaller villages like Phoenix, Baldwinsville, and Liverpool. These are all places where people can meet their daily needs—buying groceries, attending school, getting to work—on foot, bike, or bus.

These are all also places where there are lots of jobs. The shaded areas on this map contain 86% of all jobs in Central New York. They’re heavily concentrated in Downtown Syracuse and on University Hill, but many jobs are available across the rest of the city and its suburbs. Outside of Syracuse, jobs cluster around smaller cities like Oswego, Auburn, Fulton, Cortland, and Oneida, and around villages like Canastota, Oneida, Skaneateles, and Chittenango.

But even though all of these job opportunities are accessible to many people who get around without a car, any given person living car-free can only access a small fraction of the total. People living in Downtown Syracuse can walk to the jobs available there, but not to any of those available in Downtown Cortland or Oneida. Some people heroically bike from the Northside to work in Salina, but they can’t very well ride all the way to Fulton. Centro runs limited service between Oswego, Syracuse, and Auburn, but it’s barely adequate for making jobs in any of those urban centers accessible to people living in any other.

Compare that limited situation to the options available to a car-owner in Clay. The region’s multi-billion dollar highway network puts every single job within an hour’s drive of that remote location—bringing economic opportunity to the relatively affluent residents of a sparsely populated area while that same level of choice is denied to those who for whatever reason do not own a car.

The result is that urban centers like Oswego, Phoenix, Syracuse, Auburn, Liverpool, and Cortland—places that account for just third of the region’s workforce but 88% of its car-free households—are home to more than half of all unemployed workers in Central New York.

But what if each urban center was not just the place where nearby car-free households could find work, but also a portal to every other urban center in the region? A person could walk from Syracuse’s Westside to a transit station and ride to work in Canastota. Someone else could bike to the Fulton station and access opportunities to work in any one of Central New York’s major employment centers. 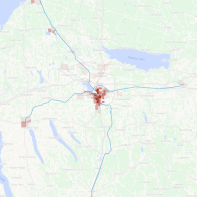 Here are those same maps—car-free households, jobs, and people looking for work—overlaid with blue lines showing some of the rail lines that already run across Central New York. Trains running on these tracks could open new opportunities to the Central New Yorkers who need them most. Or forget rail—buses running on the interstates could do the same thing. The kind of vehicle doesn’t really matter so long as the service connects these places and runs fast enough and often enough to make it a real option for daily commuting.

Central New Yorkers who live car-free cluster in urban centers. These places are also where most of the region’s jobs are. But because there are no reliable connections between those centers, people who do not own cars can only apply to work at a very small percentage of the jobs available to car-owners. Better intercity transit service could be that reliable connection between employment and population centers—it could make the economic opportunity that already exists in Central New York more equally accessible to everybody who lives here, whether or not they own a car.