The main objective of ReZone Syracuse, a project to rewrite the City’s zoning ordinance, is to “facilitate the implementation of the Syracuse Land Use & Development Plan 2040 (LUP), a component of the City’s adopted Comprehensive Plan 2040.” As of the most recent draft of the new zoning ordinance and map, ReZone fails to do this evenly across all of the City’s neighborhoods. In order to fully implement the Land Use Plan, ReZone needs to allow more residential density in select neighborhoods.

The City’s Land Use Plan focuses on Syracuse’s existing ‘neighborhood centers’–clusters of businesses and institutions served by major bus lines and surrounded by residential development. These are places, like Westcott Street and North Salina Street, that grew up in the 19th and early 20th centuries when people relied on streetcars to get around town.

Along with limiting off street parking and encouraging mixed-use development, the Land Use Plan suggests revising the zoning ordinance to allow high density residential development within a quarter mile (or 5 minute walk) of the neighborhood centers:

“Enable and encourage higher-density housing within the pedestrian-shed of mixed-use corridors and neighborhood nodes, placing people within walking distance of neighborhood centers.” Land Use Plan, pg 32

“Support and encourage high-density residential projects on upper floors of corridor buildings, and on properties adjacent to the commercial corridors to promote more foot traffic, interaction and vitality, as recommended by the Land Use Plan. (This may call for Zoning changes as well as selectively incentivizing residential projects when market conditions do not.)” Comprehensive Plan, pg 23

Particularly, the blocks around the James Street neighborhood center in Eastwood are zoned almost entirely as R-1–single family detached houses on lots at least 40 feet wide and setbacks at least 30 feet deep. This is the opposite of “higher-density housing,” and it is totally inconsistent with the City’s Land Use and Comprehensive Plans.

It doesn’t take much effort to find two maps in the Land Use Plan that explain ReZone’s decision to keep Eastwood low-density. 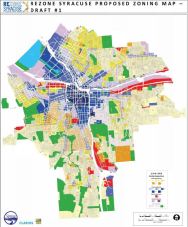 If it makes sense to allow developers to build multi-family housing around the City’s neighborhood centers (it does), then ReZone should reclassify the blocks within a quarter mile of James Street as R-2 or denser. Revising the zoning ordinance in this way isn’t going to change anything overnight. Allowing apartment buildings on the blocks adjacent to James Street isn’t going to bring a huge wave of construction to Eastwood. But there’s no reason to leave existing density limits in place around neighborhood centers when the City’s own Land Use Plan recommends doing just the opposite.