331 Winton St is a 2-story, 3-unit apartment building on the Northside. Jefferson Tower is a 23-story, 295 unit Downtown high rise. ReZone can’t tell them apart—as far as City Hall’s new zoning ordinance is concerned, both are ‘multifamily’ housing, and both will be banned from most of Syracuse. 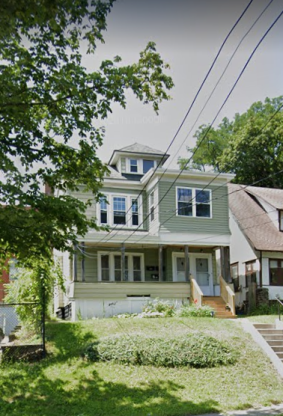 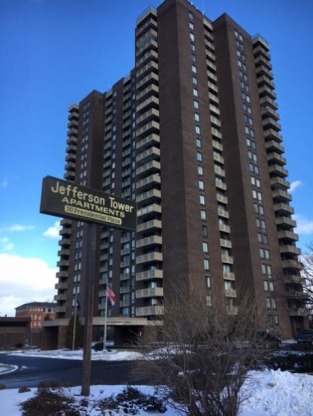 That will cause 2 huge problems: it will make neighborhoods less able to adapt to change—both population gain and loss, changing family size, climate change—and it threatens neighborhood character because 331 Winton St is part of Lincoln Hill and contributes to its character, so banning that building from that neighborhood necessarily means changing the neighborhood’s character. Fixing the first problem is easy (just add housing), but fixing the second is harder because it means coming up with a definition of ‘multifamily housing’ that can differentiate between 331 Winton St and Jefferson Tower.

The question ReZone needs to answer is this: how many apartments can a building have and still fit in with the rest of the neighborhood? The best way to find out is to just look at which different kinds of housing already are in which neighborhood. This is the only way to describe neighborhood character as it actually exists without resorting to personal opinion.

Here’s a map of all 2-family houses in Syracuse. They’re spread across most of the City and are common in almost every residential neighborhood. The only exceptions are the City’s sparsest neighborhoods—like Sedgwick and the Valley—and it’s most built up areas—like lower James and Downtown.

Here’s a map of the City’s 3- and 4-family houses. 3- and 4-family homes are common in almost every residential neighborhood in the City, and they are absent from Sedgwick, the Valley, lower James, and Downtown. 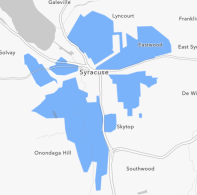 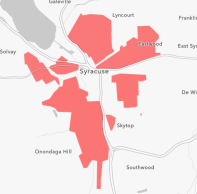 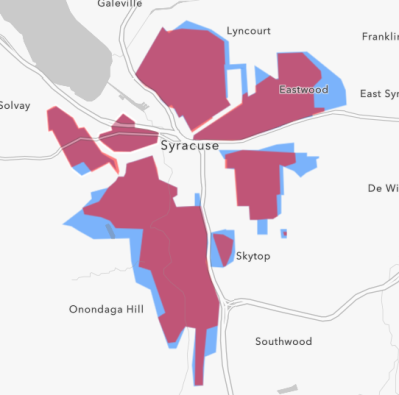 That makes good sense since so many 3-family homes are just modified 2-flats, and it’d be hard for someone to tell exactly how many apartments are in one of these buildings just by looking. They couldn’t have existed anywhere but those neighborhoods that already have 2-family homes, and they fit into those neighborhoods’ character just fine. 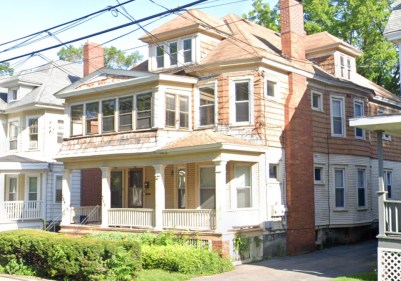 ReZone could (and probably should) make even finer distinctions among multifamily housing—buildings with between 5 and 15 apartments are also common across the City, often look like big houses, and are worth distinguishing from larger apartment complexes—but this is the big one. In any Syracuse neighborhoods where you can find a 2-family house, you can also find 3- and 4-family houses. No neighborhood whose character accepts 2-family houses can reject 3- and 4- family houses. When ReZone acknowledges this, it will make Syracuse more adaptable, more equitable, and more resilient, and it will actually protect and preserve Syracuse’s neighborhood’s character.