ReZone’s final draft doesn’t go that far, but it does reduce parking requirements significantly, particularly for residential properties. In the March 2018 draft, almost all types of residential building were required to provide one parking space for each housing unit. The final draft eliminates that requirement for 1-family houses, accessory dwelling units, and boarding houses, and it reduces that requirement to .5 spaces per unit on properties that can house three or more families. (Strangely, the one space per unit rule still applies to 2-family houses, but only if they’re built on a lot of more than 5,000 square feet).

The final draft also does make it easier for all types of properties (residential, commercial, and mixed) to get around these baseline parking requirements. It includes a 30% reduction for properties within 1000 feet of a bus stop (you can read more about earlier versions of this exemption here and here) and a new 15% reduction for properties that provide space to park 1 bike for every 4 cars.  Crucially, it allows individual properties to combine multiple reductions (the March 2018 draft had capped the total cumulative reduction at 75%), and it rounds the required number of parking spaces down to the nearest whole number (so a 3-family house—which would need 1.5 spaces—only has to provide 1 space, not 2).

The only bad change in this draft’s parking regulations is a new requirement that any property making use of these exemptions must apply for a special use permit or site plan. That means that there will be a public hearing where NIMBYs might show up to demand that the City look out for the interests of car-owners instead of everybody else. Here’s hoping the Planning Commission has the spine to tell them ‘no.’

Centro doesn’t currently run any kind of rapid transit, but they’re working on it. The SMTC proposed two BRT lines in 2017, and Mayor Walsh’s transition team proposed a third when he took office. When that new service starts running, as many people as possible need to be able to live and work near those lines.

This new draft will make that more possible. The Eastside BRT line will probably run in the Erie Boulevard Median—a route that will take it past miles and miles of parking lots. This draft changed many of those lots—at least on the south side of the street—from Commercial to either MX-2 or MX-3. That incentivizes mixed-use infill, it will bring any new development to the property line, and it will limit the amount of off-street car parking on those lots.

The northern end of the proposed SU-RTC line has similar problems—there’s a lot of empty space around the RTC and not a lot of housing. The March 2018 draft would have banned anybody from living there, but this new draft allows multi-family housing to be built on all of the empty space north of Park Street and Hiawatha Boulevard.

And finally, this draft changed a bunch of properties around the intersection of South Ave and Valley Drive—a proposed stop on the Eastwood-OCC line—from MX-2 to MX-3. That change allows for taller buildings which means more people will be able to live and work right at a BRT stop.

City Hall’s Land Use & Development Plan—the document that was supposed to guide the ReZone project—called for letting more multi-family housing in more neighborhoods. That would have allowed Syracuse to accommodate a greater variety of people, and it would have made the City’s neighborhoods more resilient in the face of demographic and economic change.

So it’s bad that each new draft of the ReZone map has banned multi-family housing from more of the City. That will lead to either depopulation or displacement, and it’s a totally unnecessary response to neighborhood demands to keep commercial development out of residential areas.

On the other hand, this draft restricted commercial development in neighborhoods like University Hill and Westcott without restricting housing opportunity. It did this by changing parts of those neighborhoods from mixed use zoning to R-4 or R-5—purely residential classifications that still allow multi-family housing. 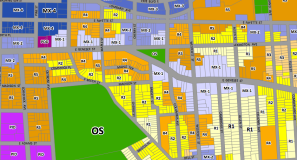 There are other changes—clarification on rowhouses, tweaks to the height restrictions—but these are the big ones. They will determine who can live where, how people will get around, what neighborhoods become. Those are high stakes—Syracuse has to get this right.