Streets are the publicly-owned space (all of it) between private property lines. That space contains the paved lanes where cars drive and park, and it also contains the raised concrete area where people walk and wait for the bus, where neighbors stop and chat, where kids set up lemonade stands.

That includes grass, sidewalks, and the paves car-lanes

For decades (forever?) City Hall has spent millions of dollars to maintain the portion of that public space below the curb, and it has sheepishly suggested that everybody else could, maybe, if it wasn’t too much trouble, use their own time, money, and energy to maintain the little plot of public space above the curb in front of their property. This local experiment in the Tragedy of the Commons has left Syracuse with broken sidewalks covered in snow, and it’s left people dangerously exposed to car-traffic because the only place they can walk is on the pavement below the curb.

So it’s a big deal that Mayor Walsh is trying to get City Hall to take full responsibility for the full width of the public street instead of confining DPW’s maintenance work to the car-dominated area between the curbs. So many people get around Syracuse some way other than in a car, and they need wide, clear, level, ADA-compliant sidewalks across the City. The Mayor’s commitment sidewalk maintenance can meet that need.

But it would be much better to get past this backwards notion that got Syracuse in this mess in the first place. The notion that the street is made up of two parts—space for cars below the curb, and sidewalks above the curb. One the real street that has to be maintained, and the other a nice amenity if we can afford it.

The Mayor’s commitment to major road reconstruction has the potential to eliminate that division by redesigning city streets to actually accommodate all of the different people who need to use them in different ways. 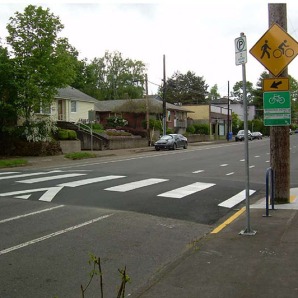 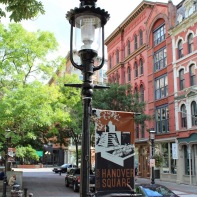 Bollards that carve out space below the curb for bikes, raised crosswalks that extend the sidewalk past the curb through the intersection, additional curbs that separate bus lanes from all other paved lanes, getting rid of curbs entirely, banning motor vehicles even below the curb—all of these potential changes blow apart the idea that the curb is some special boundary line that marks the edges of the real street. All help people make good use of the whole street—from property line to property line—in a variety of ways, and all make it clear that City Hall has an obvious responsibility to maintain the whole street for all of those uses.

None of this is guaranteed. The Mayor only announced his intention to maintain every sidewalk—City Hall still has to work out the actual details of how to actually do it. And more street paving could actually make Syracuse worse if it’s just a way to reassure car-drivers that City Hall still thinks they’re the most important people on the street.

But the promise is there, the potential is there. In a City where 30% of households don’t have a car, 20% of people are too young to drive, and 13% of workers walk to their jobs, it’s ridiculous that local government has left its sidewalks to deteriorate so badly for so long. This new commitment to sidewalk maintenance can change that, and a new understanding of how people really use our streets can make sure that it never happens again.